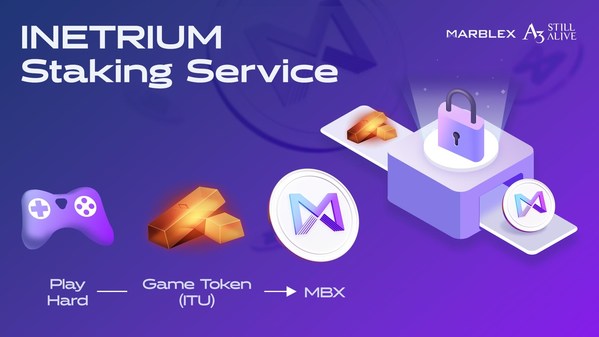 Starting today, the ITU Staking service is now open to users on the MARBLEX WALLET Application. Limited-time promotions and rewards include:

To celebrate the game's latest update, players can participate in several in-game events and receive special rewards including:

Set in an apocalyptic fantasy world of swords and sorcery, A3: Still Alive is a cross-genre mobile experience that pairs the enormous and living worlds of Open-World RPGs with the extreme combat of Battle Royale. Players must be vigilant in an always-open Player vs. Player (PvP) environment as they fight against enemies with intense hack & slash combat and prove their mettle in a variety of PvP and Player vs. Environment (PvE) modes. A3: Still Alive is beautifully rendered with splendid console-quality 3D graphics that are brought to life thanks to the outstanding optimization of the Unity Engine.

A3: Still Alive is available as a free digital download (with in-app purchases) on Apple's App Store and Google Play, in 172 countries around the world. The game is also available for download as an Open Beta for Windows PC via the A3: Still Alive website.

Established in Korea in 2000, Netmarble Corporation is a top developer and publisher pushing the boundaries of the mobile gaming experience with highly innovative games including Marvel Future Revolution, Ni no Kuni: Cross Worlds, Lineage 2: Revolution, The Seven Deadly Sins: Grand Cross, Blade & Soul Revolution and MARVEL Future Fight. As a parent company of Kabam, and a major shareholder of Jam City and HYBE (formerly Big Hit Entertainment), Netmarble strives to entertain audiences around the world with a variety of mobile games based on its powerful franchises and collaborations with IP holders worldwide. More information can be found at http://company.netmarble.com