BARCELONA, Spain, Aug. 5, 2022 /PRNewswire/ -- Ex-FVP of King Studios, Manel Sort and his team at G4AL recently partnered with Yield Guild Games (YGG), one of the biggest gaming community based guilds within the Web3 space. 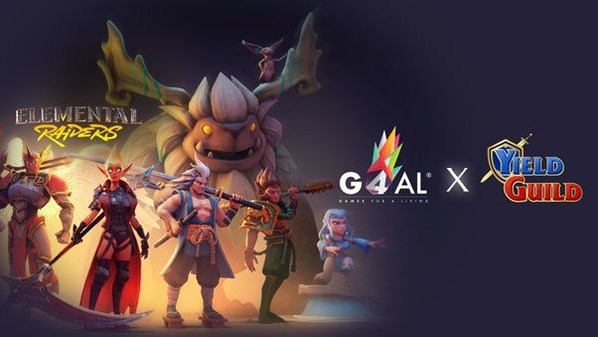 Since starting with major shares in the Axie player base, YGG as a guild has since then expanded into a lot of different avenues. This partnership aims to introduce their latest game: Elemental Raiders, and throws light on the commitment from both parties towards the growth and acceleration of Web3 gaming as it shifts towards a longer and a sustainable model.

While commenting on the new collaboration, Sarutobi Sasuke, head of partnerships at YGG said this contributes to the overall vision and narrative of Yield Guild Games.

"G4AL's economy of a singular token being used within all of their games including Elemental Raiders is something we are excited to see being developed. We've partnered with Manel and the team because we believe the potential they hold in becoming industry leaders, especially with the huge professional gaming experience that they offer. We're really excited for our community to jump in and make a mark", Sasuke added.

G4AL and YGG's partnership will include but be not limited to the following:

"Our partnership with YGG allows G4AL as well as Elemental Raiders and all of our other upcoming titles to take a long-term approach towards empowering the Web3 gaming community. Through using our initial game assets, they will get early access to our first games releasing in Q4 2022, and help us shape the future of G4AL" says Manel Sort, CEO and Founder of G4AL.

With its own metaverse in the near future, YGG acts as an umbrella of support for its gamers, bringing players together to decide what games they want to play, assets they acquire, and how they use them in the game.

"With the PC beta version of the game now live and mobile coming soon, everyone gets to play the game for free - and test out G4AL's first game; Elemental Raiders. By being involved with co-marketing campaigns hosted with guilds such as YGG, users can also start earning tokens by playing for free," added Manel Sort.

Yield Guild Games (https://yieldguild.io/) is a decentralised gaming guild acquiring non-fungible tokens (NFTs) that generate rewards from active play in blockchain games. YGG's mission is to onboard millions of players around the world to the "play-to-earn" revolution that brings the benefits of blockchain technology to those who need them the most.

A short documentary released in May 2021, Play-to-Earn: NFT Gaming in the Philippines, reveals the story of a rural community that earned an income through play-to-earn gaming amid the COVID-19 pandemic. The documentary, which was produced as a collaboration between Yield Guild Games, Delphi Digital and Emfarsis Consulting, demonstrates how NFTs and cryptocurrencies are providing transformative economic opportunities for people young and old in developing nations where jobs are lacking and crisis relief has been limited.

Klaytn Foundation launches Web3 hackathon, with over US$1 million in prizes and grant opportunities!